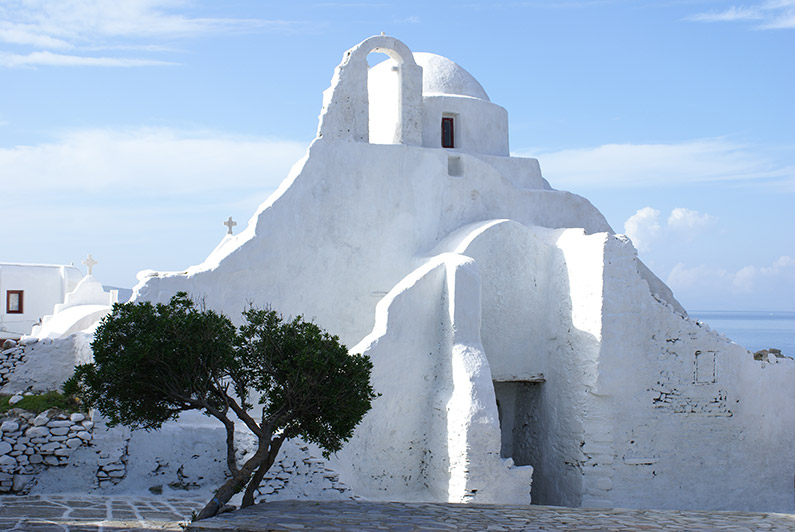 The Windmills, Mykonos Town (western part of town). From as early as the 16th century, the windmills are one of the most recognized landmarks of Mykonos. Once this island was a great producer of wheat and bread. The area of the windmills has a splendid view on Little Venice and is the most popular place in Mykonos to watch the sunset.

Little Venice (Alefkandra), Mykonos Town (most western part of town). A district located at the sea, famous for its picturesque medieval two and three storey houses, which stand like a wall above the sea, and their colourful wooden balconies. Little Venice is one of the most beautiful and romantic places in the whole of Mykonos and offers a fantastic sunset. A favourite activity is drinking a cocktail in one of the many bars and cafes while watching the sunset on the seashore. You will reach Little Venice walking from the windmills down the stairs. It is only a five minute walk from Fabrika bus station and there is a sign for it on the other side of the square.

Panagia Paraportiani, Mykonos Town (most western part of town). Of all the churches on Mykonos, the most impressive is Panagia Paraportianí, a true Byzantine jewel. This whitewashed church, which building dates back to 1425 and was not completed until the 17th century, is the most popular and most photographed of the 400 churches on the whole island of Mykonos. It is made up of four chapels at ground level with another one above. Only one of the chapels on the ground floor is open to visitors, from early morning until sunset. The church is located in the Kastro district, the oldest section of Mykonos Town.